Yes, I was told to do core exercises years ago.  I just didn’t really like to do them.  It was boring and I was so weak that the exercises were a huge challenge (think pain).  A little over 2 years ago, I injured myself and learned that I really needed to strengthen my core.  I agreed and worked hard at it!

During my off season about a year ago, I got a little lazy about those exercises.  Well, there were consequences and I felt them.  Once again, I started strengthening my core and it made all the difference.

I don’t think I’ll ever stop strengthening my core.  I now accept the fact that if I want to run, I need a strong core.  A few times each week I do my core routine.  It really is a must.

Here is part of an article about why……….

Why should runners do core stability exercises?

As with single leg strength training, which I am a real advocate of, by addressing muscular imbalances and improving muscular strength you will prevent and reduce injuries to the body and as a runner you will improve your efficiency and overall performance.

If you want to read the whole article:

Since I am now on rest and recovery, it is a great time for me to devote some time to continuing to strengthen my core.  It doesn’t take that long, maybe 15 minutes per workout.  In addition, I am trying to find a yoga class that fits my schedule.  I believe I will benefit from the additional stretching and strengthening.

I love looking back at all the events that I participated in throughout the year.  I wrote a separate post for each of the running events.  You can find them under the 2012 archives.

As my kids are getting older, I am trying to get them involved in some of the local events.  I love sharing my passion with them!  And, this year my husband and I actually rode in 2 events together.  Usually we have to play tag team, but with the support of family, we were able to get out together.

Here are the running events that I competed in:

Here are the events we participated in as a family:

Here are the cycling events I completed:

I accomplished quite a bit and had a ton of fun doing it!

What a challenging race!  A marathon is difficult enough for me, but Mother Nature threw in a storm that made it even more difficult!

A few days before hand, I knew it was going to be stormy.  Even the local news was commenting on the weather’s impact for the upcoming marathon.  There was no getting around the storm.

“Weather Update: Make sure to bring rain gear to CIM”

What I didn’t know was how bad the wind was going to be and how it was going to affect me.  I think it exhausted me both physically and mentally.

“Gusts up to 40 miles per hour were so strong it knocked a tree into a power line, forcing organizers to reroute the race.”

The night before, I did my usual race prep.   That way when I wake up in the morning there’s not much to do.

All my gadgets laid out.  My watch and ipod charged.

From the moment I got up at 4am Sunday morning, I knew it was going to be an adventure.  But, I’m a determined individual and after all the training (4 months of it!), I didn’t want to “give up.”  So, regardless of the howling wind and the sheets of rain, 9000 (I was later told that 1/3 of the runners wimped out!) of us crazy runners showed up for the 30th California International Marathon (CIM).

By the time I arrived at the starting area, my socks and shoes were already drenched.  I wore a poncho to keep my clothes dry and only took it off minutes before we started.  I also dressed in layers so that I could keep warm and then toss the layer when I needed to.  It was in the 50’s and so it wasn’t that cold.

The first 3 miles were very taxing.  Not only was it crowded with people, but there was also a huge amount of debris on the ground.  As people were shedding their ponchos, garbage bags, rain gear, etc, and the wind was picking them up, I had to be extra careful not to trip or slip on anything.

In addition to the rain and the wind, there were huge puddles (or small rivers) that were just unavoidable.  I can’t believe that I made it the whole way without a blister!

Photo by unknown…….taken off the internet

Around mile 8 I came upon my husband, 2 children and a friend.  It was great to hear them cheering me on.  And, I really appreciated them coming out, especially with the stormy conditions.  Since there were less spectators and festivities (bands, music) it meant even more to me to see them.

This is one of the signs they were holding.

The miles were passing by quickly.  And after the ½ way mark, the wind seemed to calm down.  I didn’t have to focus as much on the elements, just the road in front of me.  I had written my gel schedule on my hand so that I didn’t forget when I was to fuel up.  I aligned my fueling with the course’s water stations.

I was approaching mile 20 and found my family there again.  Such a nice thing to see!

As soon as I passed mile 20, I knew I had “hit the wall.”  I felt depleted and really didn’t know what to do.  I decided that I would jog and then walk through the water station.  I wasn’t going to give up.  After all, I only had 6 miles to go.  Up until this point, I had been able to keep my pace despite the conditions.  I’m guessing that is why I struggled.

Soon, I was walking and then off to jog some more.  I kept thinking……”One mile at a time.  I can do this!  I can do this!  I’m prepared, I’m strong and I will do this!”  I was coming to another mile marker and took a break.  1 minute later I was off jogging.  My legs were not happy with me, but my mind was staying strong.  I was determined to finish this marathon even if I had to crawl or roll!

Finally I approached the finish area.  The weather was nice and there were plenty of people cheering everyone on.  “Go 453, you can do it!”  Yes, I could do it and I was going to cross that finish line!

I saw my friend and my 2 children at the finish.  I was over whelmed with emotions!  First, I was so happy to have finished!  And, second, I was happy that I actually improved my time!

At the same time I was disappointed that I missed my Boston Qualifying Time by 3.5 minutes (They recently changed the times making it harder to qualify).

“Qualifying times are based upon your age on the date of the 2013 Boston Marathon.”

All in all, I enjoyed myself up until mile 20.  I feel like I challenged myself and am proud that I didn’t give up when it got tough.  After all, if it was easy, everyone would be out there running marathons!  And, despite the storm, I ended up with a PR.  This is definitely one event I won’t forget! 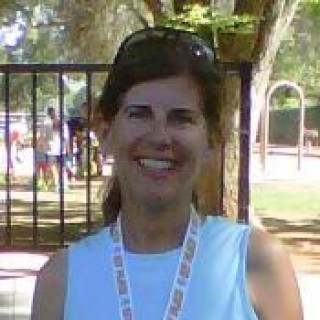